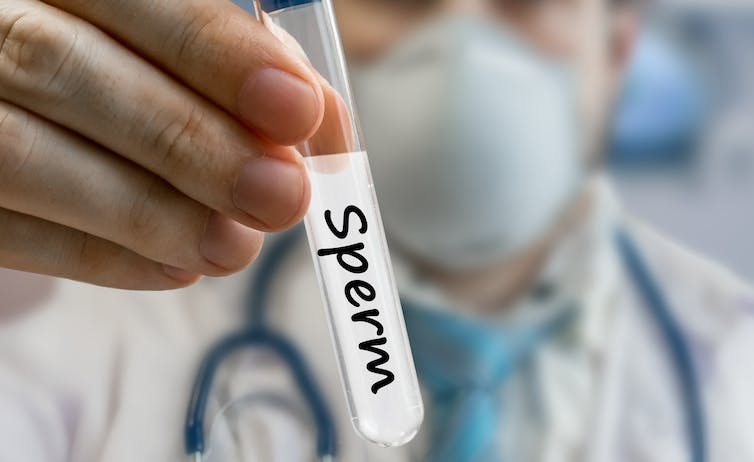 At least half of the donors who had donated anonymously were in favour of their offspring being able to know their identity. Shutterstock

Many Victorians are now discovering for the first time that they have offspring from sperm donations made in Victorian clinics in the 1970s and 1980s.

These findings were revealed in a new report released earlier this month by the Victorian Assisted Reproductive Treatment Authority (VARTA), the organisation charged with overseeing applications for information from donors, donor-conceived persons, their parents and descendants.

The VARTA report revealed that sperm donor records that were held by clinics in the 1970s and 1980s have been preserved. This is good news for people who wish to find people to whom they are related via donor conception, using last year’s changes to donor conception laws in Victoria.

But it presents new challenges for people who may not have been aware that their sperm donations led to the birth of children. Some Victorians have been confronted with requests for contact from children they never knew they had.

Last year in Victoria, key amendments were made to the Assisted Reproductive Treatment Act that gave all donor-conceived people, regardless of when they were born, the right to apply for information about their donor to the Central Register.

This world-first legislation was prompted by research that shows that people related through donor conception want information about each other and that when they are allowed to, many donor-conceived people access information about their donor to better understand themselves and their ancestry.

A study in Victoria also found that at least half of the donors who had donated anonymously were in favour of their offspring being able to know their identity.

At the time when the amendments were proposed, many were concerned about the psychological consequences of retrospective removal of anonymity, particularly for donors who thought that they were anonymous.

Others argued that the law change was needed to give all donor-conceived people, including those who were born in the era of anonymity (before 1988), the right to know their biological origins.

A year on, a picture of how donors and donor-conceived people in Victoria have responded to the new law is emerging.

Most donor-conceived people who have applied to VARTA for information about their donor have been able to find out his identity. A few have found that their donor has died, but they nevertheless appreciated the opportunity to know who he was.

For some donors and parents who have not told their adult children that they were conceived from sperm donation, the law change has caused distress and concern about how information which they thought was secret will affect them and their families.

Donors who are found, whether they now live in Victoria or elsewhere, are often asked if they are willing to be contacted by their offspring and exchange information.

Some decline and lodge a so called “no contact preference”, but most are willing to share some information about themselves, and are interested to know about the people they have helped to conceive.

The process of contact between donors and their offspring often starts very tentatively with exchange of emails.

If the parties want to take it further, they may decide to talk to each other on the phone and eventually they might meet in person. After meeting some move on to connect as families and people related through donor conception, including biological half-siblings, can get to know each other.

Contact is sometimes a one-off but there are many examples of donors meeting with one or several of their donor-conceived offspring, establishing friendships, and discovering that they share both physical attributes and interests with their new found relatives.

The changing landscape of donor conception

The early days’ expectation of donor anonymity has gradually moved towards openness and acceptance of the right of donor-conceived people to know their origins.

While Victoria was the first jurisdiction in the world to remove donor anonymity retrospectively, donors around the world are increasingly agreeing for their information to be made available to their offspring, and want to know how to handle a future contact with offspring.

Some predicted that retrospective removal of donor anonymity would spell the end of donor conception, a prediction which thankfully has proven to be unfounded. Others contend that in the era of DNA testing, donor anonymity is a thing of the past anyway.

While the law change has challenged many parents who have not shared the information about using a donor with their adult children, research shows that people prefer to learn about their conception from their parents, and that the age when they find out that they were donor-conceived does not affect the relationship with their parents.

A year in, mostly positive outcomes

A year on from the change in Victoria’s donor legislation, there have been many successful connections as a result of over 160 applications to the Central Register. There has also been challenges for some donors who feel that their rights have not been considered and for parents who have not disclosed their use of donor sperm to anyone.

On balance, Victoria’s world-first approach to giving all donor-conceived people the right to find out about their donor has brought more good than harm.

This article was co-authored by Louise Johnson, Kate Bourne, and Alexandra Saltis from the Victorian Assisted Reproductive Treatment Authority (VARTA).

This article was originally published on The Conversation. Read the original article.